Menu
Log in
Register
Affiliate Disclosure: We may receive a commision from some of the links and ads shown on this website (Learn More Here) 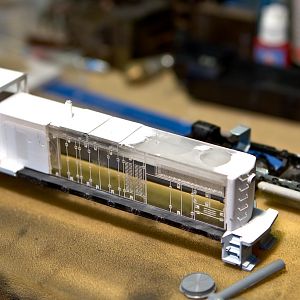 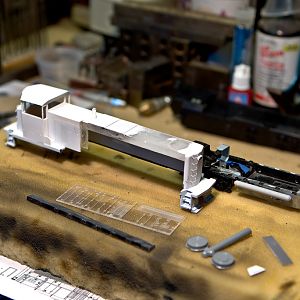 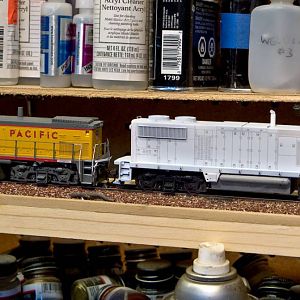 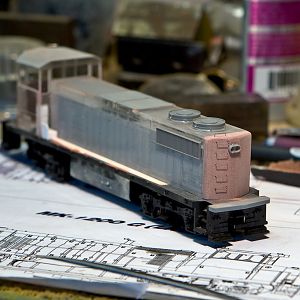 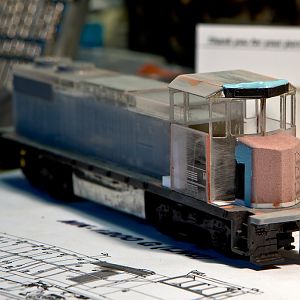 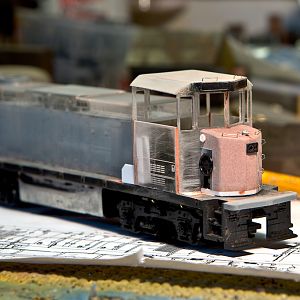 Actually I'm not sure if &quot;scratchbuilding&quot; is 100% accurate. All the black plastic parts you see in this photo are stock of modified Athearn GP-35 parts. The rest is my work.

All images Allen Rockwell 2008
Click to expand...
That is sweet, looks like they're molded in clear plastic, are you casting most of the shell? I'd love to get a hold of those parts, if so!
jbaakko, the clear plastic parts you see are laser cut/engraved acrylic (plexiglass).

I'm going to finish this model as a one-off ... then I might make another shell and cast it as a one piece shell. We'll see.
Allen, Excellent work from scratch! My name is Lynn, I was the 1st lead designer @ MK Boise in 1992-94 for this model locomotive (MKAT 1200). The project engineer, now project manager wanted to start with an EMD switcher frame but it was too short to fit the Cat 2000 hp engine. We then went with 4 GP-7 frames. I chose the GP-28 carbody, lowered (long hood FWD); std cab w/short hood shortened with enough room for the toilet. Made steps/handrails std EMD seating for 3 crew making it a road/switcher. The radiaters were double pass to get enough cooling in the space available. Track side rear handrailing is removable to get access to batteries and compressor. Cooling hood and engine hood are removable. Engine hood has top access covers that open up. Since the GP-7 UF had deep girders, the LNG tanks were installed on a carriage. One large dia tank in the middle and two smaller ones on either side. MK built the 4 units only but later got orders of the same configuration w/diesel tanks. I designed the layout for ease of maintanence. I also did part of the design on the MK-5000 high speed freight. Email me if you want to know more about this locomotive.
Where did you get the dimensions for the long hood? &amp;nbsp;Also who made the long hood with the laser engraving? &amp;nbsp;Im going to be working on making a MP30B-3.