#1
My first question is, do the delayed uncouplers work, like the magnet that goes under the track, manufactured by Kadee, Bachmann, ? ; and has anyone tried the hump in the classification yard? So the uncoupled cars roll into the classification area?

KJC has posted a folded dogbone design that will be a good basis for my stuff, and my first added detail is the following yard design.

Outline of mainline and basic industries:

Detail of my proposed classification yard with hump modification: 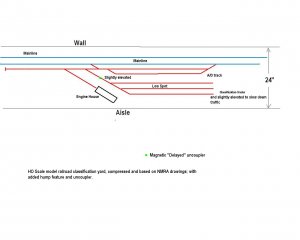 #2
It's an interesting idea, although I can think of several possible problems -- you'd need to tune your cars carefully as to weight, rolling qualities, coupler flexibility, etc to get consistent operation. It seems like you'd also have to figure out pretty carefully exactly where the magnet would go. If it were me, and I really wanted a hump, I'd want to try mocking one up and testing the whole thing thoroughly before I went to put it on a layout.

The Kadee delayed action magnets work -- I dunno -- maybe 60-70% of the time. Often you need to make a couple of tries before they'll uncouple, but the prototype is like that, too.

#3
Why do you want a hump yard there? It seem to be very hard to operate and maintain. You have perfect access to all the track in the yard, so you really don't need it. Just use a scewer for uncoupling too. For magnetic uncoupling it usually is only needed when the track is hard to reach. Keep it simple. KISS method.

#4
jwb said:
It seems like you'd also have to figure out pretty carefully exactly where the magnet would go. The Kadee delayed action magnets work -- I dunno -- maybe 60-70% of the time. Often you need to make a couple of tries before they'll uncouple, but the prototype is like that, too.
Click to expand...
I watched some utube videos where they used the uncoupler, and it was like you said, he had to back over it a couple times (sometimes) to get it to work. The location of it is easy, just before the switches. He used the magnet that goes between the rails, and I am going for the larger one that goes below the ties.

My plan is to have a very slight grade, just enough to get the car rolling, and then a slight grade up hill on the far end, to slow the cars down so they don't clunk into the stop.

Wondering if anyone pulled this off. I like to experiment, and during my era (pre 1960) hump classification yards were in use.

Thanks for the feedback, lasm
J

#5
Again, I would mock this up to see how it really works before I laid anything down permanently.

#6
Motley said:
Why do you want a hump yard there? It seem to be very hard to operate and maintain. .
Click to expand...
Michael,

Thanks for your input--I want to put one there because it will be easy to watch, and easy to see. Also, it is something I want to try.

On my first layout I had a mini version of a more prototypical yard and it was a pain in the but reaching in and uncoupling stuff and then I started thinking about the magnet, but I did not want to invest the energy into a 4x8 that was a practice layout if anything. Plus, I don't have to be steady and concerned about bumping the trucks off the rails when I manually unhook the cars. Even using the stick.

I froze my hands a bunch of times holding onto the chainsaw for hours on end in the sub zero Northern Minnesota winters and have some difficulties feeling where the fingertips are, as well as holding stuff.

The simple part of my layout is the track design and DC operation. This hump concept doesn't seem overly complicated to me, but then again, DC block wiring seems easy, too.

I think the thing will be super easy to operate, I will be using remote turnout controls like I had on my first layout and should be able to stand in one spot and push buttons.

#7
jwb said:
permanently.
Click to expand...
This word does not exist in my model railroad vocabulary.

#8
I see there's a thread about just this subject at http://cs.trains.com/mrr/f/88/t/228384.aspx It says about the most anyone can say on the subject, I would think.

#9
Hump yard will not work well.
I have seen one on an episode of tracks ahead. It had sensors to measure the speed of the car and an air blast to slow the car down.
The big issue is that the weight of the cars and the friction of the wheels does not scale down to the real thing. The cars need to move unrealistically fast to overcome the friction of the wheels.
Steve

Great of you to find that thread. Looks like one person that actually made one that works and several raining on his parade.

Choops, you have no confidence in my building abilities. My last project was a 10' x 20' railroad suspended by nylon thread from the ceiling in the living room. I started building it in August and was running trains on it by Christmas or so. The thread is called "need track advice". Trains 12 cars long go around at scale 100 mph if necessary, you will find my videos on utube, channel is David Banta.

Anyway, the point about free wheeling and weights, etc. is well taken. I have some custom truck sets on some of my favorite rolling stock that move with almost no effort.

Probably only want a few cars in each lane at a time. I have a bunch of ebay stuff I can experiment on, but that is a few months off.

Thanks, again for your input. lasm
T

#11
I helped a friend setup a HO scale hump yard, nine tracks in the bowl. After much experimenting we found the key to be the wheelsets. Putting the same wheelset on all cars caused them to roll very similar. Then we worked on the height and slope to get cars to roll halfway into the bowl. He had an electromagnet uncoupler that did a good job. Reading the car numbers and selecting the right track was the hard part. He was working on barcodes under the cars to do the sorting. It worked quite well and was used in all operating sessions. If you want to communicate, send me your email address and I'll forward it on to him.

Great feedback, just what I wanted to hear. I think you gave me a lot to work with right there. Still like to get more feedback on the cheaper uncouplers, otherwise I will spring for the electromagnetic one.

I am not going so far as the bar codes under the cars, but maybe down the road when I hit a plateau on the rest of the layout it is something I can look at.

#13
I was just reading about hump yards in John Armstrong's book Track Planning for Realistic Operation. It looked pretty interesting. He said it would be tough to make it work but gives some example plans with grades. Might be worth a look.

#14
There was a video on YouTube that showed an operating hump yard and it was very unrealistic. The grades were very extreme as we're the speeds of the cars as they rolled at breakneck speeds to come to an abrupt stop or crashed.....I mean coupled to other cars on the tracks. Not something that I would ever include on a layout.
L

#15
I think I saw the same video Bob...I wondered how many couplers broke on a daily basis as the cars whisked through the yard at 80 scale mph into other awaiting cars. Pretty unimpressive. Honestly, I think a hump yard has to be one of the hardest things to model.

Sorry for being late on your thread here, have been a little pre-occupied of late. Looks like you have a great layout happening, with a lot of detail in such a small space, the advantage of N Scale

Am looking forward to seeing this one come together.

I will be following along! I am glad to see you have another fun project and thanks for sharing it with us. I did not know you had a YouTube channel and I will be checking that out too.

I don't have any tips for the hump yard, but I have one for your hands. I have similar problems with my hands from turning wrenches in all sorts of weather, nothing as bad a Minnesota winter though. My problem has more to do with arthritis then frostbite so this might now work for you. What I found for me when my hands get numb is a few minutes in very hot water then a few minutes in very cold water. Keep repeating until you regain the feeling in your hands. You will know when the feeling returns because it will cause some pretty good pain. Once the pain gets going good I stop with the water and after 10-20 minutes of pain the feeling returns and I can use my hands again.

#18
Hey guys thanks for the advice, support, and frowns. Used to getting the entire spectrum here. Incorporating your input and what I found on Bachmann's board ( http://www.bachmanntrains.com/home-usa/board/index.php/topic,957.0.html )

I will go with the magnet where it is in the drawing and a slight incline but not expect the cars to roll into the lanes, though I know some of mine will. I am talking a 1% grade with a small basin at the bottim to keep the cars in place.

The purpose of the "real" hump yards is not just to smash the cars together, but parking them without making the switcher cover every inch of track. Time is of the essence in rail yard operation for efficiency. There is a great video out there, a film of the 50's I think, that filmed all these actual operations (not a model mock up) of the PRR and it included a hump yard sequence.

My utube videos are for entertainment and do show the evolution of my second layout, the 10' x 20' suspended around the living room; complete with a 20' passing siding, 2 spurs, and 4 groups of buildings. That will be coming down when we move, dismantled, and salvaged into this new layout.

I admit these videos are pretty crude, but I am learning as I go: My Channel (only model railroading)

Thanks for reading and lets all have a blast with our model railroads!!!!! lasm

#19
HO Scale hump yard (not mine) posted on utube, the cars do move too fast for my liking, but the thing does work:

I can come back here for future reference. Sometimes I am like "where did I see that, anyway"

#20
I bought all the switches and track for my new hump yard, will be improving on the above design and using the plan in the first post.

Mainly wanted to show off my new space for my model railroad, and wanted to get it on this "build" thread before I forget. We won't be moving in until June 1, but will be collecting ideas in addition to the yard, logging operation, and gravel pit. 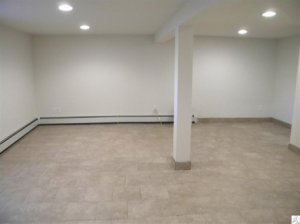 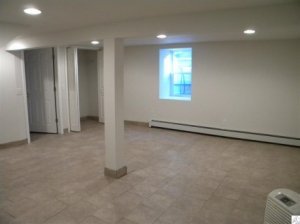 First thing will be painting the sky and clouds, and will be going with the folded dogbone concept posted in the beginning of the thread.