#1
Ok, this is going to be my first build so I thought I'd start a thread and show the progression. Any comments and recommendations are greatly welcomed.

My empire is small so there is not too much I can do. The time era is from 1971-2003 up in New England during Autumn. The train line is the Boston & Maine and it's hauling freight. I would like a mountain gorge/gap to cross but because of the limited space, I will not be able to make the % grade required. The bench work will be 28" tall to match the desk in the room and to keep it low enough for my 3 year old grandson to enjoy. The space I have available to me consists of a 9' back wall, a 4' wall to the right, and a 6' wall space to the left. 7' if I run it to my desk. I'm looking at bridging the gap between the left and right wall to make a lopsided oval. I'm going to use open frame cookie cutter to make the benchwork with an open space in the middle to give me room to reach everything. I'm thinking of making the width of the bench against the 9' wall 24", and the width of the left and right wall, 18". The width of the gap will be about 10-12" and will have a bridge or removable section to allow access to the back and side walls. I'm looking at using 1x4"s to make the open frame and use 1/2" plywood for the sub bed.

I'm also looking at having 2 main lines. Not sure yet if I want them separate to run 2 trains independent of each other or connect them to change things up a bit. Still thinking on it. With one loop I figure I have about 28' of track to play with. I'm also looking at elevating one of the lines against the back wall about 2" to not make everything look to flat. 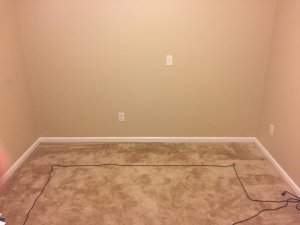 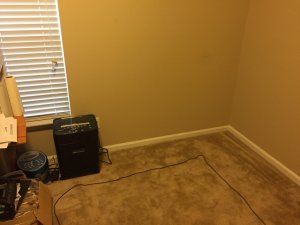 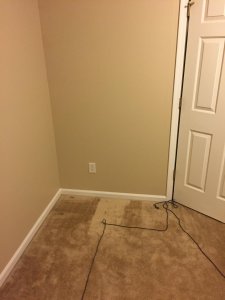 #2
The rope on the floor is a rough layout of the benchworks. The area in the middle will be open. 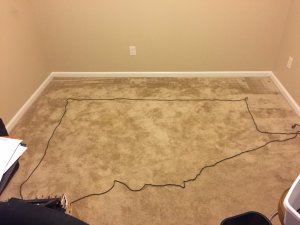 Here is the start of our empire: 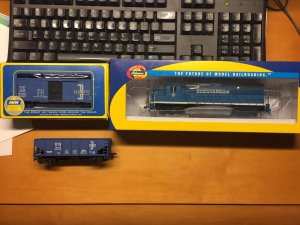 Hedding out now to get some lumber. Hopefully the next pictures will be of a constructed open frame.

#5
Put about 4" of extruded foam insulation board on top of the plywood. Build your benchwork, including the plywood, 4" lower than your desired height. Then add two 2" layers of foam on top of that. That way you can have a gorge by carving out the foam.
You can make a mountain by stacking pieces of the foam on top of each other. It may not be exactly what you want, but most of us don't have the room to do what we'd like.
Last edited by a moderator: Jan 21, 2017

#6
I'll be following along on this.
W

#7
flyboy2610 said:
Put about 4" of extruded foam insulation board on top of the plywood. Build your benchwork, including the plywood, 4" lower than your desired height. Then add two 2" layers of foam on top of that. That way you can have a gorge by carving out the foam.
You can make a mountain by stacking pieces of the foam on top of each other. It may not be exactly what you want, but most of us don't have the room to do what we'd like.
Click to expand...
Hi flyboy,

Thanks! That will work! I just made the frames but haven't put anything on them yet. A project for another day.
W

#8
Ok. The plans lasted a whole hour until I got to the store. Turns out 1x4" wood was almost twice as much as same length 2x4"s so I went with the 2x4s. Definitely heavier and more over built but that's ok. How I was going to arrange the benches changed a little bit but worked out just as well. I made the left bench, the right bench and then but the back wall bench in between. I was missing 2 nuts and will have to run back to the store to get them otherwise the back wall frame would have been connected. I will have to play around and see how I want to connect the open end. Instead of crawling under the benches I thought about making a lift out section about 2' long so I can walk into the center but am not sure how to wire it for easy removal and install. If anyone has done that I'd love to hear how you did it. 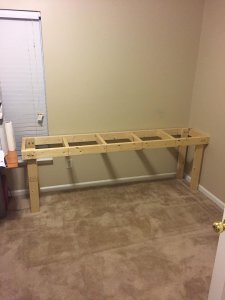 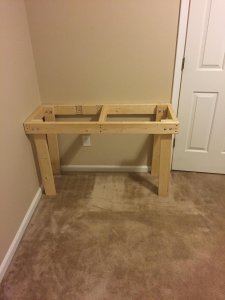 Back wall frame. Its held up by clamps for now until I can get some nuts for the bolts. 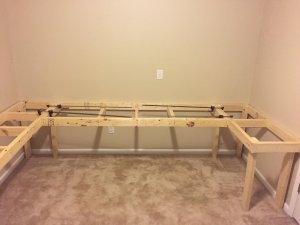 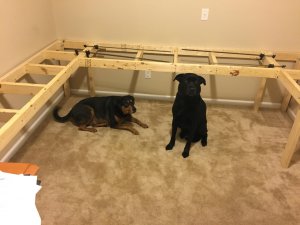 #9
Did some work on the benchwork and added the cross connect section. It's about 8' and is 12" wide. I only partially finished it because I'd like to put a pull out section or a lift gate but am not sure how wide an opening to go with and how to wire it for power. 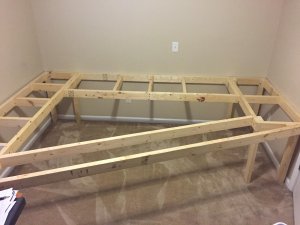 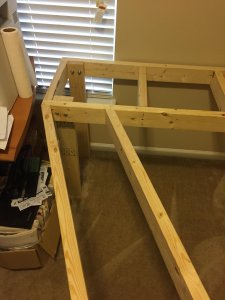 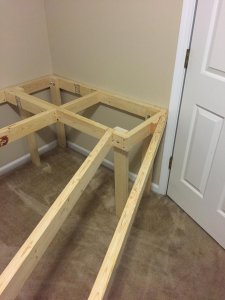 #10
Framed up the front and cut a 2' opening in it for access. Still debating on whether to do a lift up or drop down gate. 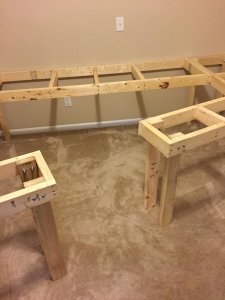 #11
I have decide to go for a drop down for access to my layout. My layout is mainly a switching layout and the drop down on my layout is actually part of my hidden staging area. I like the drop down because once it's down, it's out of the way with no need to have anything to hold it up.

#12
montanan said:
I have decide to go for a drop down for access to my layout. My layout is mainly a switching layout and the drop down on my layout is actually part of my hidden staging area. I like the drop down because once it's down, it's out of the way with no need to have anything to hold it up.

Thanks for sharing. That's a good point. I hadn't thought of that. How do you keep your drop down in the up position and what did you have to do to modify the hinge end to make it clear the bench?

You can check out this old thread on a couple sample drop downs:

You can check out this old thread on a couple sample drop downs:

Greg
Click to expand...
Thanks Greg. I hope to put some plywood on it this weekend. Need to figure out how to do the grade elevation into a curve.

#17
Here's how I made my drop down bridge. It was going to be temporary, but it has been working for almost 30 years so I left it alone. If it ain't broke, don't fix it. 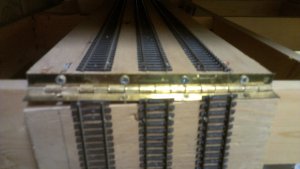 On one end I attached the drop down section to the bench work with a piano hinge. The bridge was made from a scrap of 5/8 plywood. 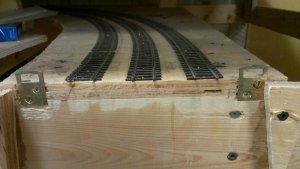 On the other end I used a couple of scraps of plywood screwed in at an angle to force the tracks into alignment. When it is lifted up, the tracks really have no choice but to align. 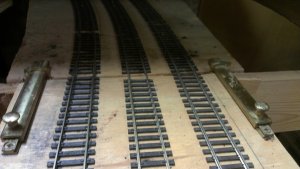 To lock the bridge in the up position, I used a couple of slide bolts. I did it on top because there was no scenery planned for this space as these tracks are for hidden staging and to allow for continuous running. 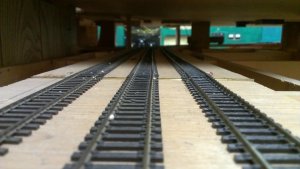 It ain't pretty, but it's simple and it works. Guess some scenery could be added.
W

Thanks for sharing that and for the pictures. Those are worth a 1000 words. The gate looks pretty straight forward and easy to do. I'm going to try to work on putting down plywood this weekend and I'll try to start the gate as well. I'm looking forward to getting some trains running.
W

#19
Put down some 1/2" plywood on the frame yesterday and that went pretty well. I tried making a drop down gate but that didn't turnout so well. The plywood I used turned out to be warped. Thought it was 3/4 but it was somewhat smaller. I do have some 3/4 in the garage so I'm going to try again. Should be flatter. I also noticed that I installed the piano hing facing down where Chet's hing is facing up. Doing it that way should make the 2 pieces of wood line up better. If I have time after the gate I'll start working on the grade.

Oh, my flex track and turnouts came in yesterday. Once the bed grade is made, I'll start laying some track. 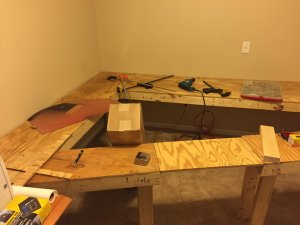 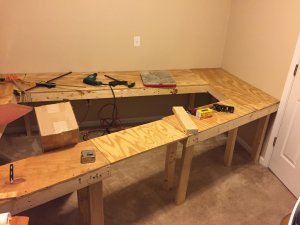 #20
Its always nice to see a new layout coming to life. You made mention of the prices of lumber , yes I know what you mean but it is all part of the hobby and only a small piece of the puzzle. Although I can't tell from looking at your photo's but my feelings are you will run into issues for shortly, for one your radius is going to be very very tight behind the door and for another , benchwork height compared to doggy's height tells me you are going to have a very sore backleaning down over the layout. Have you looked into other types of layout construction that will better suit a design? Perhaps post your room dimensions so the guys can help come up with a design that will better suit the dimensions of the room. Sorry if I missed it but didn't see a scale posted , unless perhaps your scale is N and that would make a world of difference.
You must log in or register to reply here.
Share: Facebook Twitter Reddit Pinterest Tumblr WhatsApp Email Link